Drawing the Whole World to Christ

By jdardis07September 30, 2022Uncategorized
No Comments

Many of us know the profound changes that arise, both in our lives and communities, when we begin to spend regular time in prayer before the Blessed Sacrament. Pope Saint John Paul II wrote in 1996:

“Closeness to the Eucharistic Christ in silence and contemplation does not distance us from our contemporaries but, on the contrary, makes us open to human joy and distress, broadening our hearts on a global scale. Through adoration the Christian mysteriously contributes to the radical transformation of the world and to the sowing of the Gospel. Anyone who prays to the Eucharistic Savior draws the whole world with him and raises it to God.”

Isn’t that an amazing thought? You—wherever you are—can “broaden your heart” with God’s own compassion, and draw the whole world with you to Christ in prayer, simply by spending an hour in adoration.

Can you imagine how different might the world be if every adoration chapel were supported in perpetuity, so that finances were never an obstacle to the spread of Eucharistic adoration? 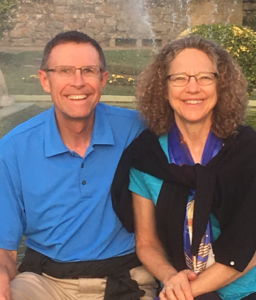 In 2020, long-time Foundation donors Jack and Vicki Auzqui established the Adoration Chapel of Billings Endowment at the Catholic Foundation of Eastern Montana, which provides a never-ending income stream for this beautiful Eucharistic adoration chapel. Gifts to endowments are unique because your donation doesn’t just make a difference for the chapel now—it continues to do so every year, forever!

Other than a generous gift of land from the Diocese, the Adoration Chapel of Billings was entirely constructed—and is still 100% supported by—donor contributions.

Jack Auzqui, who helped spearhead the construction of the chapel, notes, “It is critical that there be multiple sources of income, including long-term income, to make the chapel sustainable over time. People might think it’s financially supported by the nearby parish or by the Diocese, but that isn’t so. That’s why this endowment is so important.”

Each year, the Foundation sends the Adoration Chapel of Billings a distribution—a certain percentage of its endowment balance—and, after a small administrative fee, reinvests any remaining profits into the endowment for growth. The Catholic Foundation of Eastern Montana’s investments are overseen by professional advisors and by a board of Catholic laypeople and clergy throughout our diocese, who ensure that Foundation endowments grow over time to become steady, reliable sources of income for their beneficiaries.

This year, the Adoration Chapel of Billings Endowment distribution helped cover the cost of security cameras for the chapel. Jack Auzqui stated, “Our late-night adorers are particularly grateful for this, as it provides greater security and peace of mind. They can now clearly see the parking lot before exiting the chapel and making their way to their vehicles.”

As this endowment builds through the years thanks to generous supporters like Jack and Vicki, it could eventually cover all the costs associated with the Adoration Chapel of Billings. 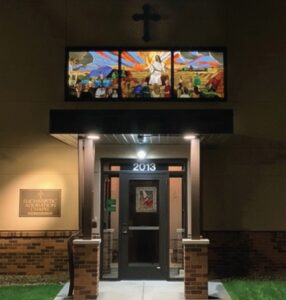 The Adoration Chapel of Billings is now protected by a security camera system that gives late-night adorers peace of mind, thanks in large part to their 2022 endowment distribution.

That isn’t the only amazing thing about giving to endowments, though. “We support this endowment because creating long-term income for the Adoration Chapel is so important, but also because of the Montana Endowment Tax Credit. When I learned about it from Judy (Foundation President), I thought, ‘Everyone should be taking advantage of this!’ It allows you to redirect part of the state income tax you would pay, to support a charitable organization you love instead,” Jack states. “It’s amazing that this benefit is out there, and it’s the right thing to do, both financially and to support the Church.”

More than 200 people spend time in adoration weekly (some offering multiple hours) at the Adoration Chapel of Billings. Why are they there? Jack recounts: “Just recently, a friend’s grandmother was in her last moments on this earth. She was being taken off life support at the nursing home. Another mutual friend of ours was praying in the Chapel, and saw this friend, the grandson, come in. He just came to pray for his grandmother in her hour of need. How comforting to be able to have close, personal contact with Jesus at such an intimate moment!

“And that’s one of the beautiful things about adoration—it is a refuge for the difficult times when you want to get a little closer to God. I want everyone to have that. I want everyone to know that Jesus is there on that altar, 24/7, just waiting for you to visit Him. What could be better than that?”

Truly, what could be better? These are the mysteries of our faith that endowments help protect. Every gift to an endowment at the Catholic Foundation of Eastern Montana, whatever the size, helps ensure that the aspects of the Church you love most will have financial security forever.

Give to an endowment today

If you’d like to support the Adoration Chapel of Billings Endowment or another of our 125+ endowments, or if you have any questions, please contact Judy Held, Foundation President, at 406-315-1765 or [email protected]. You can send donations and other mail to the Catholic Foundation of Eastern Montana at PO Box 1345, Great Falls, MT 59403.