At the Heart of a Family

By jdardis07August 4, 2022Uncategorized
No Comments

At the Heart of a Family 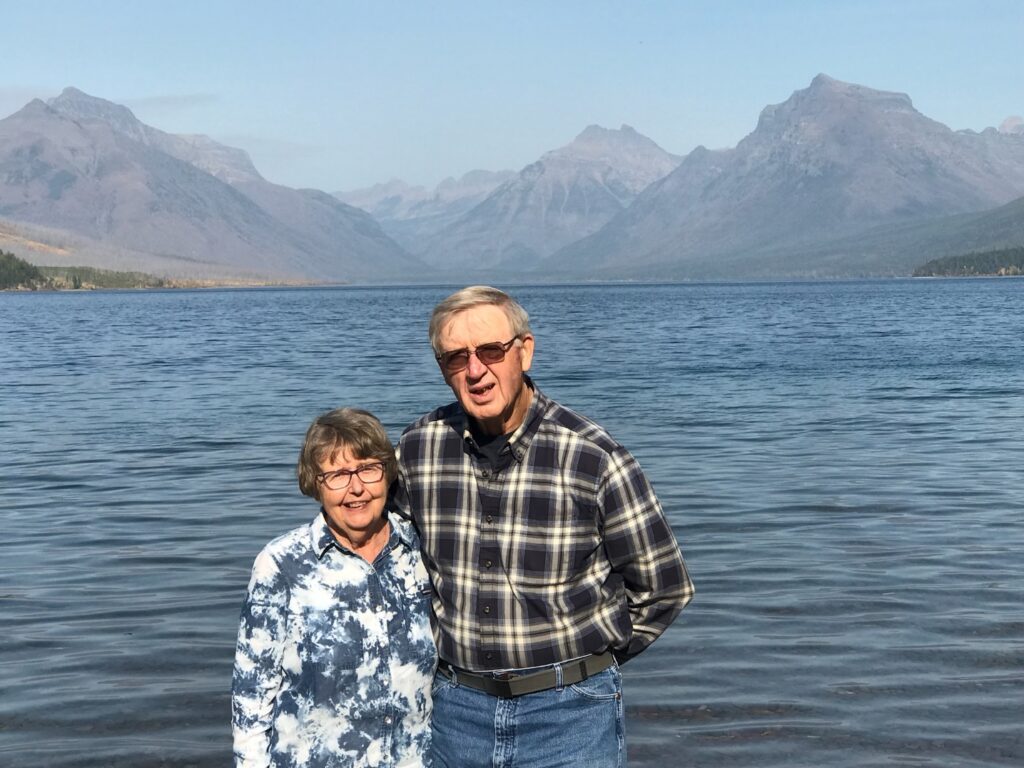 Bob and Ardyce Kelly at Lake McDonald (Glacier National Park) in 2021. This faithful couple gives us all an example of keeping our philanthropy local, lasting, and above all Catholic.

Rewind to Montana State University in the 1950s. Bob Kelly, studying to become an engineer, was set up on a blind date with a lovely young woman named Ardyce from Froid, Montana. Both were college students—Ardyce the daughter of a wheat farmer, while Bob was the son of a coal-miner in Roundup. Laughing, he recalls having the thought, “This probably won’t work out.”

Happily, Bob was wrong! It did work out, and they were married in 1960, with Ardyce eagerly converting to Catholicism. The Kellys have now lived a very happy, faith-filled marriage for more than sixty years, mostly in the Billings area as members of St. Pius X Parish. “Ardyce and I have been fortunate, and we want to make sure that our parish, at least, has what they need to help people strengthen their faith,” Bob reflected.

Bob and Ardyce were blessed with two daughters, Laura and Lana, and now have four grandchildren and four great-grandchildren. Philanthropy has been important for every generation of their family. Some of Bob and Ardyce’s favorite memories of charitable giving happened at Christmas the last several years, when—rather than give gifts to each other—the whole family pools their gift budgets and makes a gift to one of their local parishes.

This speaks to another part of Bob and Ardyce’s philosophy: they strive to keep most of their philanthropy local or at least in-state. After Bob retired in 1997, he began to volunteer in the community and saw his neighbors’ needs up close. Ardyce spent ten years running the Sacred Heart Renewal Center and then two decades leading a women’s prison ministry, in addition to her work offering spiritual direction and providing ongoing formation to other spiritual directors in the Billings area. “We have at least 500 books on spirituality at our house thanks to Ardyce always working to learn more,” Bob laughed. “I’m a lucky man.”

This charismatic couple has a deep appreciation of the ministries at their parish (St. Pius X), St. Vincent de Paul, Angela’s Piazza, and several other Billings charities. Because of their own history of community service and Catholic ministry, it is clear that the desire to keep their philanthropy local and Catholic is at the heart of their family.

Bob and Ardyce believe that endowing gifts through the Catholic Foundation of Eastern Montana is a perfect way to meet their goals, and for the last twenty years have been making planned gifts through the Foundation to benefit their favorite local Catholic causes. In fact, they decided together decades ago to make the Foundation’s St. Pius X Ministry Endowment a beneficiary of their estate. “We knew when we were planning our estate that we wanted to give back to the Church,” Bob said.

“People in every generation need to have the opportunities I had—a Catholic school, the ability to serve in ministry, and the formation and friendships that come with groups like Cursillo, which we first joined in 1976. I hope other people know that if you didn’t get community and good Catholic education in the early part of your life, you still have a chance. And I know giving to endowments makes it possible for more people to have that,” Bob asserted. Endowments like the St. Pius X Ministry Endowment help people like Bob and Ardyce, wherever they are in life, get the formation, community, and service opportunities they need to grow in their relationships with Christ and their fellow believers.

We are so grateful for Bob and Ardyce, whose passion for serving and supporting the local Catholic church and people in need—both now and in the future—is an inspiration to all of us!

The Catholic Foundation can help you make a plan to give back to the Church for the blessings God has given you, too. If, like Bob and Ardyce, it matters to you that your neighbors (in this generation or the next) have the opportunities they need to grow in their faith, please reach out to the Foundation. We’d love to help you create your own legacy: one that is local, lasting, and above all, Catholic.