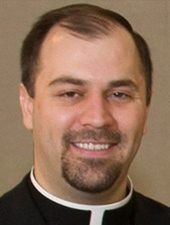 Father Dan was born and raised in Billings, Montana, graduating in 1998 from Billings Central Catholic High School. After high school, he attended college at the Catholic University of America in Washington, D.C. During his time there, he worked in the U. S. House of Representatives as the Director of Correspondence and Tours for Montana and then worked at the Pope John Paul II Cultural Center as the Executive Assistant. Throughout his college years, Father Dan began to discern where God was calling him to serve. He graduated with a Bachelors in Financial Management and decided he needed to enter into seminary to further discern if God was calling him to the priesthood. He attended seminary in Rome at the North American College and says that his time there was transforming. He was able to sing for the funeral of Saint and Pope John Paul the Great and served once as a deacon for Pope Benedict XVI. Father Dan was ordained a priest in 2006 at St. Patrick Co-Cathedral and has been serving in the Diocese of Great Falls-Billings since then. Currently, he is Pastor of St. Jude Thaddeus Catholic Church in Havre, Montana and oversees St. Jude Thaddeus Catholic School. Fr. Dan was a voting member of the Catholic Foundation of Eastern Montana’s Board from 2013-2021, but with his recent appointment to the position of Vicar General of the Diocese of Great Falls-Billings, he has moved to the Ex-Officio, Non-Voting role of that office.