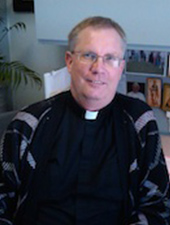 Father Jay Peterson was born Billings and raised in Huntley, graduating from Huntley Project High School in 1970. He began his formation for priesthood at the Pontifical College Josephinum in Columbus, Ohio, and completed his graduate theological studies at the Pontifical North American College in Rome, Italy. He was ordained a priest by Bishop Eldon Schuster in 1978. Over the years of his priestly ministry, Father Jay served in Billings (St. Patrick, St. Pius X, and St. Thomas), St. Leo in Lewistown, St. Matthew in Sidney, and St. Joseph in Great Falls. In 1998, he was appointed Vicar General and Moderator of the Curia by Bishop Anthony Milone, and held this administrative position until retiring in 2017. During these years, he was also a temporary administrator of several parishes during transitions and mergers. He continues to serve as Vicar General, and as such sits on various boards and advisory bodies throughout the diocese.

© 2020 Catholic Foundation of Eastern Montana. Privacy Policy | Board Portal
The information on this website is not intended as legal or tax advice. For such advice, please consult an attorney or tax advisor. Figures cited in examples are for hypothetical purposes only and are subject to change.