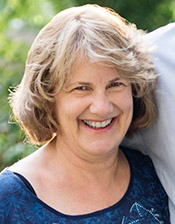 Patricia “Patti” Hohne and her husband, Bob, became first time Montana residents when they moved to Livingston in 2018. Both are becoming more involved with St. Mary’s, their parish, which led Patti to finding out more about the Catholic Foundation of Eastern Montana. Patti brings to the Foundation Board a big heart for the Church and a great deal of experience with nonprofit organizations.

Patti grew up in a small town in Tuolumne County, California, near Yosemite National Park and met her husband while attending college in Fresno, California. She and Bob decided to move to that small town to raise their family. Patti has been a practicing CPA since 1980 and founded a CPA firm with her husband in 1984 in Twain Harte, California and later in the nearby town of Sonora. Bob found his niche in private industry accounting but Patti has stayed with a public practice consisting of small businesses, many individual tax returns, and nonprofits.

Together, they raised four children: Rob is now 37 and recently moved his wife and 3 sons to Coeur d’Alene. Andrew, 35, and his new bride live in Bozeman. Michael, 32, also lives in Bozeman with his wife and daughter and son. Daughter, Katherine, age 25, is a registered nurse in Denver.

Bob and Patti became interested in the Bozeman area after their two sons settled there. They found Livingston to be more their speed and bought a house in 2014. A desire to make some life changes and be closer to family brought the full time move four years later. Bob retired from his job and now spends his time keeping the house and meals organized and does some volunteer work with the school and parish. Patti kept about 200 clients from her California practice and they keep her busy enough.

Patti has a lot of community foundation experience which she hopes can be an asset for the Catholic Foundation of Eastern Montana.