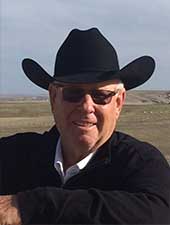 John owns and operates ranches south of Columbus in the Shane Ridge area and west of Boyd along Red Lodge Creek. An Animal Science major, he graduated with honors from MSU in 1974, and raises purebred Angus cattle on land his family settled more than 100 years ago. John served as President of the Montana Angus Association and has been a voting delegate at National Meetings for years. John and his late wife Pam were longtime advisors of the Montana Junior Angus Association and were honored as “National Advisors of the Year” in 2005. He has marketed cattle, embryos and bull semen nationally and internationally and managed the Montana Supreme Female Sale. For many years, John served on the Advisory Board of a large regional bank; he now serves on the local Fire Board, County Drought Committee and Chairman of St. Mary’s Finance Council. Additionally, he serves as Lay Minister during Word and Communion and as a Eucharistic Minister. His married sons Tom and Mark and their families are the source of his greatest pride. John’s passion for the Catholic Foundation of Eastern Montana began when he spearheaded a fundraising effort in honor of his St. Mary’s Parish centennial celebration. Patterson believes the Foundation is the logical next step to preserve and support the Catholic Church in Eastern Montana into the future.